Special address was given by our beloved GS Com.Prahladrai, Com.P.Udayasuriyan OS(South) CHQ and Com.R. Guruprasad Advisor,CHQ. GS explained the latest development of BSNL and latest 3rd PRC recommendations.3rd PRC will be implemented after completion of Assembly election in five states.

OS South in his speech highlighted the MTNL merger proposal by Govt. Already BSNL is struggling for retaining the customers and is trying to meet out the loss. During this critical period merger of MTNL which is also loss making PSU with BSNL will worsen the situation. Though Reliance JIO is offering all free services, our customers are still with us and hence we should give good service to our loyal customers. OS requested to Chief Guest that all SSA GMs should give respect to SSA District office bearers since our Association is also equally recognized and also responsible Association which was also mentioned by Chief Guest during her address. In TN Circle transfer policy is not implemented for the last ten years. If it is implemented there will be improvement in service. 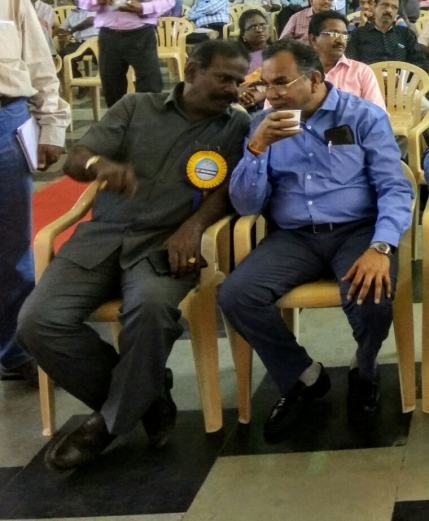 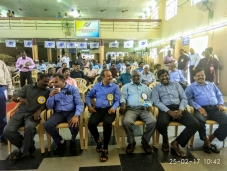 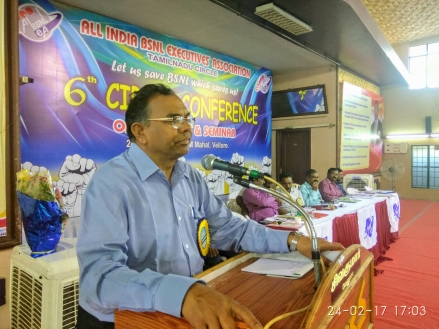 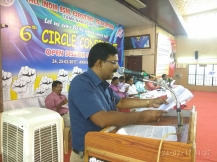 6th Circle Conference of AIBSNLEA Tamilnadu Circle will be held on 24-02-2017 and 25-02-2017 at AKM Mahal, Ariyur Road, Vellore. CS CHTD /OS(S) CHQ will be attending the Open Session to be held on 25-02-2017. Smt N.Poonguzhali CGMT TN Circle will be the Chief Guest for the Open Session.CGM(F), PGM(F) and Other GMs of TN Circle will also attend the open session. Seminar will be conducted on “Converting the NEW CHALLENGES as OPPORTUNITIES in the Competitive Arena and making BSNL as Profit Making PSU“.

GS met with GM (SR) and discussed regarding the status of 3rd PRC recommendations with reference to BSNL. GM (SR) informed that after the presentation given by DoT to the Group of Secretaries meeting held on 02.02.2017 wherein DoT has been advised to submit  the financial  position of the PSUs under the control of DoT. Accordingly, DoT has asked the feedback / comments of BSNL by Monday in this regard which is being replied shortly.

At present BSNL’s PBT is minus in %age. In view of that we have pleaded 3rd PRC to take operational profit of a PSU instead of PBT into consideration.

The arguments on JTO(T) to SDE(T) case continued for the three days on 15, 16 and 17th Feb.2017 at Hon’ble High Court Ernakulam. The matter was related to three writ petitions, it was heard in detail by the Senior Counsel. From BSNL side, Sh. R.D. Aggarawalla, Senior Advocate from New Delhi appeared for all the 3 days. The arguments concluded on 17th Feb.2017 evening and the Hon’ble High Court reserved the case for pronouncing judgment.

One Association’s Advocate wanted to remand to case to be heard again in the Hon’ble CAT Ernakulam but BSNL’s Sr. Advocate Sh. R.D. Aggarawalla opposed of remanding the case in view of further delay the case. He pleaded that there is acute stagnation in the career progression of JTOs and in BSNL field units the work is suffering due to the shortage of SDEs/SDOs. Hon’ble High Court appreciated the pleading and the case could be saved from remanding further to Hon’ble CAT Ernakulam.

Newly joined AIBSNLOA leaders assured to strengthen AIBSNLEA in Tamilnadu Circle.  Com. S.Sivakumar All India President guaranteed to safeguard the interest of the comrades who have joined in AIBSNLEA.

As per request of OS South Com.P.Udayasuriyan and CHQ president honoured  the newly joined leaders of AIBSNLOA with shawl. OS South in his special address mentioned that Com.Kamaraj is having very good organising skills and very good rapport with base level members and AIBSNLEA TN should utilize his expertise and selfless service for improving the membership of engineering cadre. OS South explained in detail the history starting from TESA joining with AIJTOA in 2004. Com Periasamy delivered vote of thanks.  The merger function was arranged in a grand manner by the Trichy Comrades.

Merger Meeting of Comrades from Other Associations to AISBSNLEA TN Circle held on  14-02-2017 (Tuesday) at 10:00 am Location: Hotel Arun, Near Railway Junction, Trichy. Press Meet was conducted before the Merger meeting. 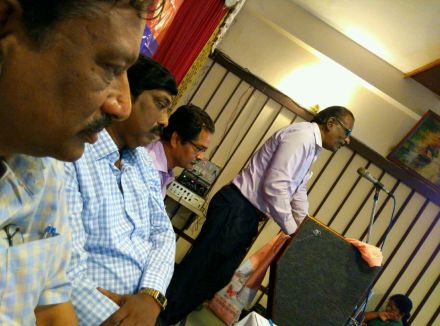 Revised Form for deduction of Membership Subscription from Salary released by BSNL CO. Remaining Members are requested to submit the subscription forms to respective BS/Office Bearers at the earliest.

OS South attended Sixth AP Circle Conference at Hyderabad on 11.02.17.General Secretary Com.Prahalad Rai  along with All India President Com.S.Sivakumar attended the meeting. CGM Telungana, PGM Hyderabad and other senior officers attended the open session. Function was arranged in a grand manner with good hospitality. Even though we lost in MVP in AP all the SSAs delegates attended the conference with zest.All the Committee members worked with enthusiasm and made the conference grand success. Our Association has been bifurcated into Telungana and AP. Separate new office bearers Election was held and elected for Telungana and AP. Highlights of the OS South address is as follows.

OS(S) and CS of South Circles are asked by CHQ for the details of Members Subscription Forms details submitted till date. All the Branch Secretaries are requested to intimate the number of applications received and submitted at Accounts Office across different Business Areas,  to Com Shivkumar FS CHTD. Com Krishnan ACS to contact each Branch Secretary  and give directions. Details are to be submitted from Circle  to CHQ before 11am of 13-02-2017. So all the Branch and Circle Office Bearers are requested to act fast and responsibly for furnishing the details at the earliest. Kindly take the matter seriously.